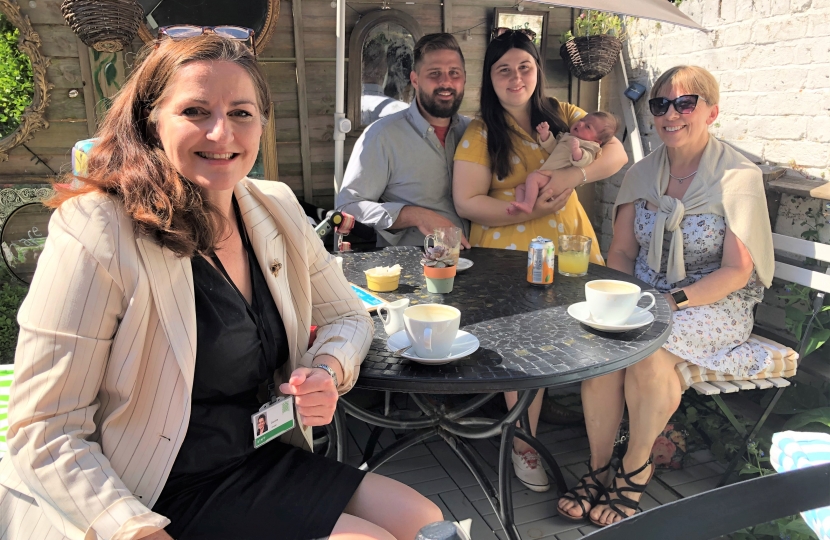 MP Caroline Ansell has met up with an Eastbourne family she helped reunite when an American dad-to-be could not get a UK visa just as his pregnant British wife was due to give birth.

Ben Jones was stranded in Washington DC last month while his wife Kirsty Hastings-Jones was in Eastbourne just days away from being a mum.

Kirsty’s mother Catherine Gilling contacted Caroline’s office desperate to ensure Ben, 31, who had applied for the visa back in March, could come to the UK. Caroline was initially told by the Home Office it would be a further 20 days before it would be even looked at. A decision might have been months away.

To speed things up, Caroline then spoke personally to Home Office minister Kevin Foster on 15th June and Ben’s visa was issued 48 hours later on 17th June just as Kirsty, 29, was about to give birth.

Ivy Violet was born weighing in at 6lbs 5 oz in the early hours with a tearful Dad on FaceTime. He was then able to get a flight to the UK to be with his daughter and wife.

The couple are now home in Meads with Ivy Violet and building their life together in the UK.

On Saturday, Caroline met up with the family, including Catherine at Café 32 in South Street to say hello.

“The news that Ben had his visa just after Ivy Violet was born brought more tears of relief,” said Catherine.  “He could book a flight to be with his daughter and hold her.

“Thank you so much to Caroline from the bottom of our hearts for giving that extra push to get the visa processed.

“We are so grateful and we feel it is important for people to see that a member of parliament listens and cares and is there as a voice for people who need help.”

She added: “Caroline then took time out of her busy schedule to meet us all. It was delightful and her warmth and caring side clearly shone through. We will always be grateful for her help.”

Caroline added: “I am really, really pleased I could do my small bit to make sure a dad got to hold his newborn daughter and a family was reunited.

“I have to say that when news came through of the birth of Ivy Violet and the visa, my heart soared because I knew what it meant to this lovely family.

“It’s been a tough year and a half for everyone because of the pandemic but this is a good news story and to be able to meet the family was a real joy.

“A thank you should also go to Kevin Foster, who pulled out the stops, and even took the time to send his congratulations via me to the new parents.”

Ben is a stone mason and Kirsty is a TV news producer. They met and fell in love in the US when Kirsty was studying in Arkansas and married in the US in 2014.