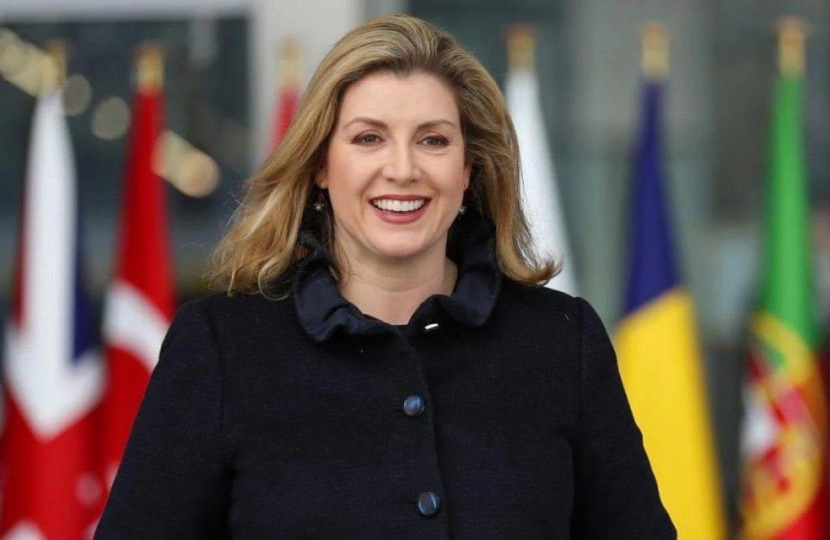 I am backing Penny Mordaunt to be the new Conservative leader and the next Prime Minister.

I think she has the depth and breadth of experience and personal qualities to uphold the highest traditions of the office and meet the challenges we face as a nation both domestically and internationally.

It was inspiring to have a front row seat at her leadership launch this week as she set out a vision of what her administration would look like.  She spoke of duty and service; unsurprising perhaps given her naval background.

That military insight is invaluable with war in Europe and rising threats from other parts of the world.

That military ethos and focus on action and delivery is one of the reasons why she was so very effective in the pandemic response – not in front of camera but behind the scenes.

She held the role of Paymaster General in the Cabinet Office and was the ‘go to’ minister every single day for every one of six hundred and fifty MPs all looking for answers to questions and to raise specific concerns and challenges on behalf of their constituencies.

At that launch, she also put support for the family at the heart of policy and I know from my own postbag how important childcare – to name just one challenge - is to parents in Eastbourne & Willingdon.

I thought it was the most impressive leadership launch and I wasn’t the only one.

Penny has experience in the public, private and voluntary sectors and she understands the role government need to play in society.

She said she would have a ‘relentless focus on cost-of-living issues’ and would slash VAT on fuel at the pumps by half.

Income tax thresholds for basic and middle earners will rise in line with inflation.

Again for people in Eastbourne and Willingdon this would be welcome news.

There are also many other able and talented parliamentary colleagues who have put themselves forward to lead. The decision lies with the party membership who will vote over the summer ahead of the new term in September.

Meantime, whilst The leadership contest may be taking up the coverage, the campaign work I am doing with people in our town very much continues.