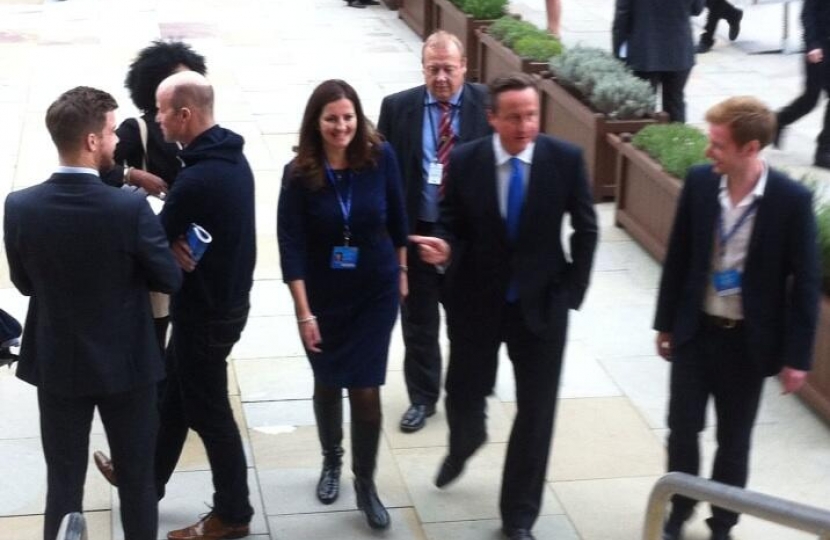 Caroline Ansell, Eastbourne & Willingdon's Parliamentary Candidate, joined colleagues from across the country at The Conservative Party Conference, held in Manchester this year.

"Travelling home, I'm trying to process the thoughts and feelings, people and policies which have filled my days from early bird meetings with Hope for Justice and twilight discussion with the Institute of Directors.

The economic message was very clear; it's business which creates jobs and we need to create the best climate for business to flourish. That means low tax, less bureaucracy, skilled employees and enhanced transport links.

I had talks with Network Rail and met with Sustainable Aviation in connection with my lobbying for the second runway at Gatwick and all that could mean to Eastbourne:- new investment, new business, new jobs (more on that following my Westminster briefing).

With the Prime Minster, I became a Dementia Friend and spoke about the work of local Alzheimer's champion Sharah Noble and the Memory Walk we made along the seafront just last weekend.

With our Sussex Police Crime Commissioner, Katy Bourne, I talked about local parents and their campaign to introduce Lillian's Law which would see roadside drug driving testing and ultimately save lives.

Fringe events around protecting our young people from the darker side of the web were both deeply worrying for me as a parent, and powerfully compelling for me as a politician - so important for images of child pornography to be called for what they are: a crime scene, so important that online hard core pornography does not warp relationships for this 'digital generation'.

And, following time together at conference, I will be working with the CEO of Women's Aid on our shared commitment to expose the crime behind closed doors that is domestic abuse - reported as affecting 1 in 4 women in Sussex - and, in view of my own professional background, with a special spotlight on education.

The range of discussion at Conference represented the full sweep of challenges and opportunities which face us as a Nation and informing debate, welcome contributions from the British Medical Association, Oxfam, NUT, Federation of Small Businesses, Save the Children, Deloitte ...

Talk on Europe was held in a whole new context, one in which our PM has vetoed an EU  treaty, got Britain out of the bail-out scheme, seen the EU budget cut and contrary to all naysayers, found allies in our bid to get powers back from Europe. I made my position clear - negotiate hard, be prepared to come out.

The Home Secretary's speech was warmly received and included a pledge to bring in specific laws against people trafficking 'modern day slavery', forced labour and sexual exploitation. I look forward to following the course of the bill and indeed to welcoming Theresa May to Eastbourne next year.

Pulling in to Eastbourne station now, for all that was raised, questioned and debated, what remains with me is a strong sense of purpose, aware that is much more to do but encouraging signs that we are turning the corner and the PM's final words, "our mission, to build a land of opportunity."