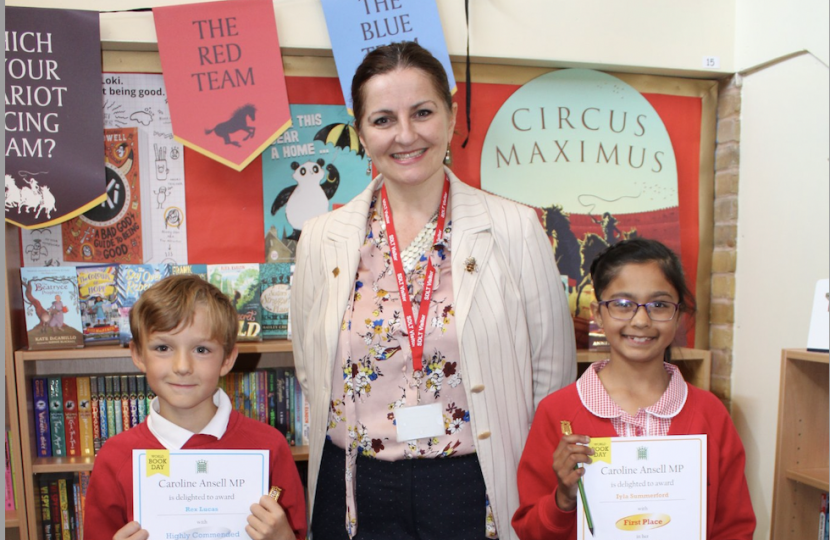 Eastbourne and Willingdon MP Caroline Ansell has visited Ocklynge Junior School to give a prize to the pupil who won her short story competition.

Year 4 pupil Iyla Summerford aged nine was judged the winner by Caroline because she liked how Iyla put her own interesting twist on the mythology of Loch Ness in Scotland in her story called The Legend of the Swamp-Weed Witch.

She has been invited with a parent to visit parliament as her prize. She also received a certificate.

Caroline also visited Bourne School to congratulate year six pupil Marli Rose Macrae who won Second place with her story entitled, The Dream Palace. Caroline said she liked how Marli had presented the forces of good and evil in her story. She received a certificate and a souvenir  House of Commons green pencil topped with a gold portcullis and swarovski crystals.

There was also a ‘Highly Commended’ for the story A Matter of Life and Death by Rex Lucas, aged nine also from Ocklynge Junior School. Caroline enjoyed the unexpected twists and turns towards the end of the story. He was presented with his pencil and certificate by Caroline and told her that he was now going to go on and develop his story further.

“What a pleasure it was to read all the entries to the competition and it was so tough to pick a winner,” said Caroline, who is a teacher by background.

“Many thanks to all who entered – the standard was very high.

“But there was a winner and Iyla’s story really stood out. Many congratulations to her for winning. She should be very proud of her achievement. I look forward to welcoming her and her family to the House of Commons”

Caroline added: “A love of literature is an important part of our education and I am pleased pupils from local schools got involved and used their skills and imagination to pen such good stories.”

The story could have been on any topic so the youngsters could let their imaginations run wild. There was no word limit to the competition but it did need to be a short story.

During these school visits Caroline spoke in assemblies and was delighted that the competition had been so well received.